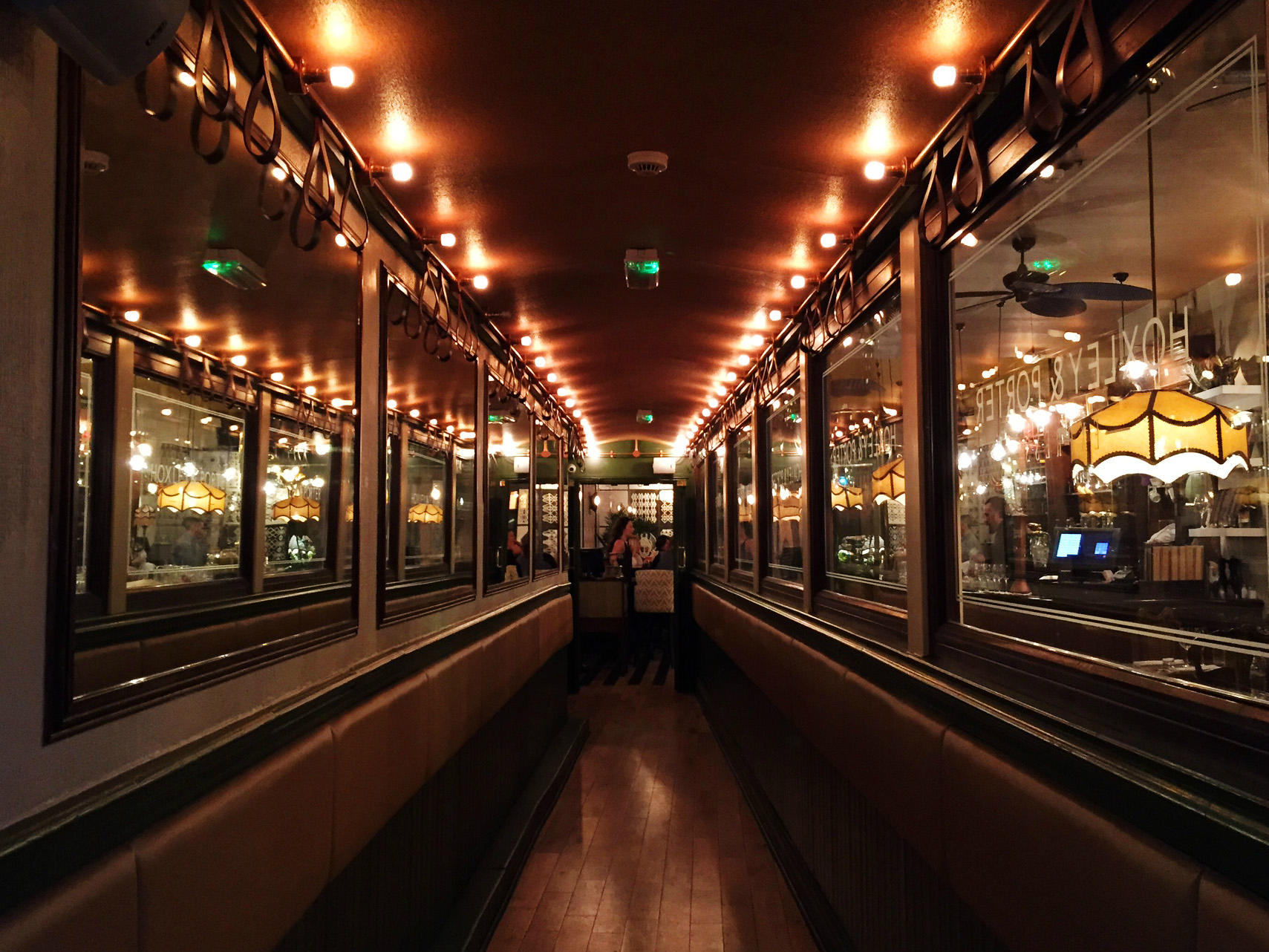 Hoxley I presume? It is I Hercule. And here comes Gatsby. As my dining buddy Malcolm and I step off an Islington street into a mystical world of retro art-deco opulence, the golden age of steam travel, genteel Victorian gentleman’s clubs, dusky Egyptian noir and a dash of African jungle exploration, it is clear this isn’t just a restaurant. It is a journey into high-concept.

Yes my friends, Hoxley & Porter is a relatively small restaurant with a big idea. With a carefully constructed fictional back story of intrepid explorers (that would be Mr Hoxley) and the enigma of an exquisite legendary diamond and the riches, ruin and royalty it has inspired (which of course is Porter), imagine yourself on the Orient Express to the Congo, in the company of raffish, colonially dressed attendants with twirly moustaches (the men), bringing you colonially-inspired cocktails.

Yes, this is no ordinary journey, from the moment you enter into a carefully styled ‘carriage’ corridor of art-deco gold-tinted décor before being welcomed into a stylishly schizophrenic interior, continuing the locomotive theme fused with junglist trimmings and textures. The staff, all waistcoats and cravats, are fully versed on the supposed legends that have inspired the theme, and it works. Predominantly because, for this diner, the ideas don’t blur the experience. Malcolm and I are here to eat. And sample impressively decadent cocktails.

King of the hill on the cocktail list, is an off-menu gem, created specially for Hoxley & Porter by resident barman Michael Prendergast, formerly of Powder Keg Diplomacy. He joins us at our table to talk us through his bespoke baby, and warn of us of its potent qualities. His creation is ‘Whatever Doesn’t Kill You’ (£15), made from Polish-rectified spirit (95% ABV) a drop of Wray and Nephew, Triple Sec, enthused with home-made tea and topped of with an absinthe-coated scorpion. As he explains, in less technical terms, ‘a vodka cocktail, constructed like a martini, which drinks like a daiquiri’. As we look through the menu and are told about the daily specials, this semi-lethal concoction, which changes from blue to purple on addition of the full ingredients, is an esteemed accompaniment. Ask for it if you dare.

The menu is less an historical theme ride, more a collection of modern British cuisine, seasonal trimmings and dashes of panache. The foundations are good solid island dining, exactly what Phileas Fogg would be ordering after his 80-day adventure.

Malcolm and I had travelled from slightly less far-flung outposts for our evening out, and for starters ordered Seared Scallops, Celeriac Puree, Spinach, Crispy Bacon and Truffle Jus alongside Salt & Pepper Squid, Pepper Leaf and Aioli. Nothing too avant-garde.

Warmed up by our scorpion cocktails (yes, you do eat the scorpion!), our wine of choice was a Largesse Merlot from a wine list that reflects the restaurant’s expansive colonial ambition. And which held its own in accompanying two classic main courses. I chose Crisp Cider Braised Pork Belly with Bubble and Squeak, Apple Sauce and Red Wine Jus – the pork belly was perfect, crackling beautifully rendered, soft supple meat, elegant flavours, while Malcolm chose the evening special – Beef Wellington. Interestingly created with rib-eye rather than the supposedly superior but less gutsy fillet.

As the millions (?) of devoted followers of my reviews will know, dessert is my least favoured course. I don’t have a particularly sweet tooth and I am usually bursting by then. However, evoking the spirit of the great explorers, sacrifices must be made, in this case for a  Vanilla Panna Cotta with Honeycomb and Glazed Peach. A delightfully light panna cotta liberally sprinkled with burnt honeycomb and sweet fruit. Malcolm is exploring a pert Raspberry and White Chocolate Cheesecake with Blackberry Coulis (£5.95). With relish.

If only the Orient Express stopped at Highbury & Islington.